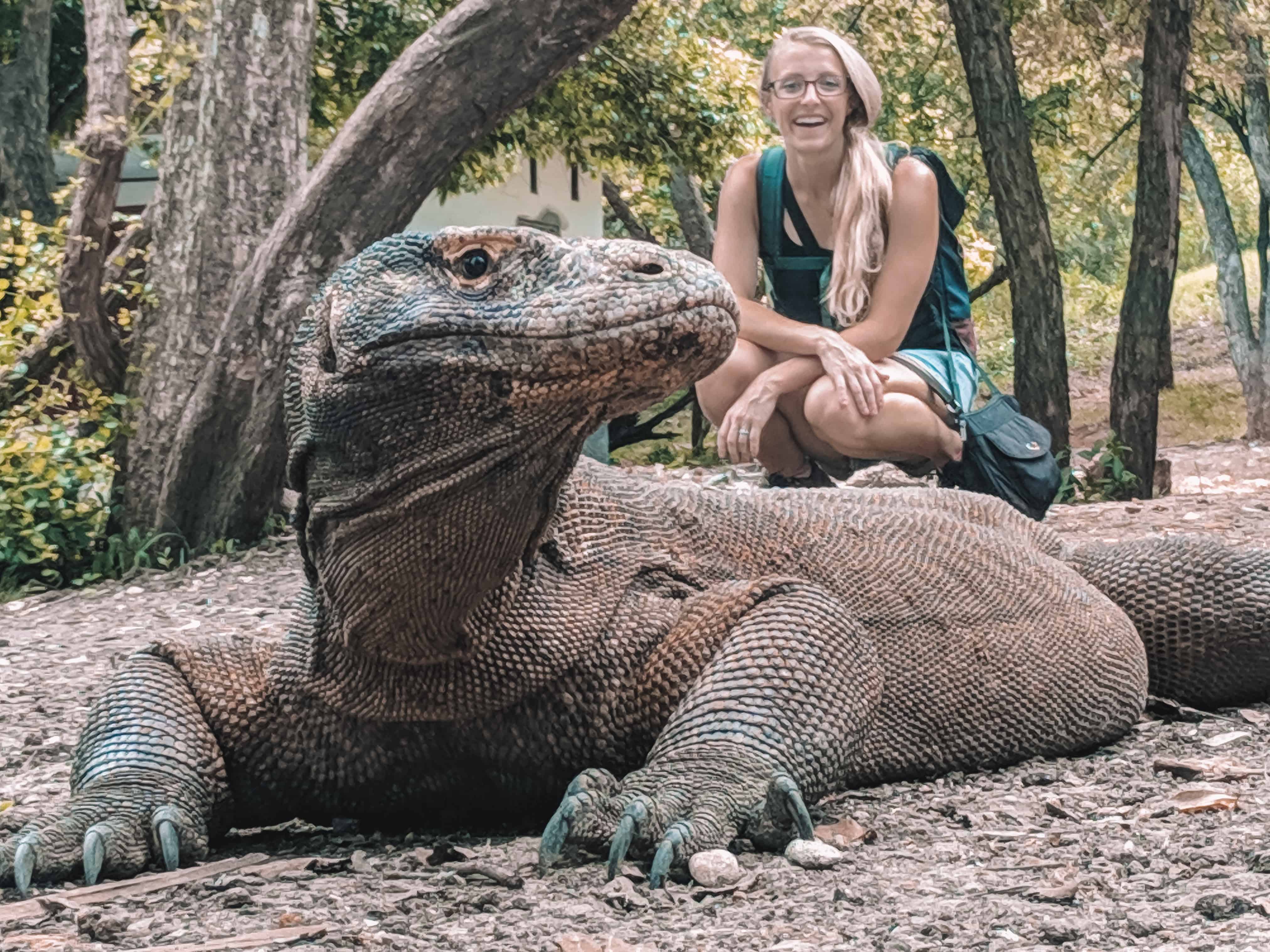 Rinca Island (pronounced like Reen-cha) is the second biggest island of the many incredible islands that make up Komodo National Park, covering 198 square kilometers (76 square miles).

If you’re planning a trip to Flores Island and Komodo National Park, be sure to stop by Rinca Island for an up-close and personal experience with wild Komodo dragons, one of the most unimaginable creatures to walk the earth.

How To Get To Rinca Island

In order to get to Rinca Island, you’ll need to fly into the small capital of Flores Island, Labuan Bajo. There are several ways to reach Labuan Bajo, the easiest way is by air.

We flew directly from Bali to Labuan Bajo using WingsAir and paid approximately $100 roundtrip. To get the best bang for your buck on flights, check out our post: 7 Skyscanner Tricks for Booking the Cheapest Flights.

Now that you’ve made it to Flores Island, you’ll need to plan your route to Rinca Island. Mike and I didn’t plan any of our Komodo National Park tours before arriving on the island; we figured it would be easy to find a tour company when we arrived and choose the best deal.

Unfortunately, this was the most difficult part of our trip to Rinca Island.

We took a taxi to the pier and talked to several different ticket offices about touring Padar and Rinca Island, both part of Komodo National Park… We were very unsatisfied with the answers we received and the shakedowns from local tour companies. There was a lot of deceit and manipulation happening at these small tour company offices so we walked away feeling defeated.

But luckily, we found a company that worked with us and gave us a good deal and we recommend booking them ahead of time. You can do that by clicking the link below:

While booking your Rinca Island and Komodo National Park day tour, make sure to catch the sunrise on Padar Island, check out Pink Beach with its crystal clear waters, and swim with the manta rays in Horseshoe Bay – another popular activity. These are exciting day trips from Labuan Bajo that you’ll cherish forever.

Before we arrived on Flores Island, we had our minds made up that Komodo Island would be the most epic place to visit; surely it was at the top of our bucket list.

Seeing Komodo dragons in their natural environment is a once in a lifetime opportunity and we couldn’t pass on getting close to these magical giant lizards. We decided that Komodo Island was our first choice.

Little did we know, you’ll actually have the best opportunity to see Komodo dragons on Rinca Island (also part of Komodo National Park), as opposed to Komodo Island. When we heard this, we opted to skip the crowded Komodo Island because the boat ride is twice as long as it is to Rinca Island.

We were able to visit Rinca Island by leaving Labuan Bajo at approximately 10am. In order to visit Komodo Island, you must leave much earlier due to extreme weather conditions at sea.

If you’re deciding between Rinca Island and Komodo Island to see the magical Komodo dragons, I highly recommend Rinca Island.

Since Rinca Island is one of the many smaller islands that make up Komodo National Park, you must pay several fees to enter at the national park office. The entrance fee for Loh Buaya on Rinca Island includes:

Mike and I paid 610,000 rupiahs to the national park office of Indonesia to get onto Rinca Island. This is approximately $43 USD or $21.50 each. Keep in mind, prices fluctuate if you visit on a weekend or holiday.

But given that Komodo National Park is a UNESCO World Heritage site, we didn’t mind paying the fees to help preserve it.

The burning question most people ask regarding Rinca Island is: “will I actually get to see Komodo dragons?”

Although I’ve only been to this island once, I can say that seeing Komodo dragons and Komodo nests on Rinca Island is VERY common. The Komodo dragons typically hangout near the ranger station, so you’ll likely see them within five minutes of arrival.

When we were on Rinca Island, we saw so many Komodo dragons that it was difficult to count them all.

Because we went during the day, the dragons were lethargic and lazy. They do this to conserve energy and escape the heat of the intense Indonesian sun. Our ranger helped us get the best pictures of these magnificent creatures while keeping us at a safe distance.

Note: Having a ranger or guide with you during your time on Rinca Island is mandatory.

After our amazing encounter with Komodo dragons, our guide invited us to join a small group of other tourists and offered to take us on a hike through the island. We where were able to see more wildlife such as water buffalo, sumba deer and wild boars.

During our two-hour trek we were able to ask him questions about the Komodo dragons and he told us many interesting things and local stories. He was so knowledgeable about the dragons and offered very insightful information.

He also showed us a video he had taken a few days before of a Komodo dragon swallowing a macaque monkey without chewing… One of the most disturbing things I’ve ever seen! It felt like a scene straight out of Jurassic Park.

If you’re deciding whether to do the Rinca Island hike, I would recommend it. It’s a short trek and can easily be done by people of all fitness levels and most physical conditions. The panoramic views at the top are insanely gorgeous and you’ll be able to see one of the Rinca Island villages in the distance and the surrounding beautiful islands.

Can You Stay On The Island?

While Rinca Island is inhabited by a few locals, tourists are not allowed to stay on the island.

Instead, the best place to stay is in the capital city, Labuan Bajo. Labuan Bajo is a small port town that offers plenty of different styles of accommodation.

This hotel was located on the cliffs above the ocean and offered the most brilliant view. It was a great place! The rooms were basic, but clean. And we enjoyed the delicious food and drinks at the restaurant on-site, and the pool overlooking the bay below. Our trip was in February and we paid about $43 USD per night to stay at this hotel.

If you’re looking for something a bit fancier, AYANA recently opened its Komodo resort. For those unfamiliar with AYANA, these are five-star resorts with five-star amenities. Book your stay with AYANA, here.

The best time to visit anywhere in Komodo National Park is in the morning. The ocean becomes choppy with strong currents in the afternoon and there were many times when I felt like the small boat we were in was going to tip over.

We also recommend visiting during the dry season, which is between April and October for Indonesia. This will ensure that you get the most breathtaking views of the islands and the dragons.

Check Out Our Rinca And Padar Island Youtube Video

Read next: Kelimutu National Park: How to Plan Your Epic Adventure

Rinca Island is the best island in Komodo National Park to see Komodo dragons in their natural habitat. I highly recommend adding this stop to your itinerary when visiting Flores Island in Indonesia.

Our travel blog is the reason we’re able to travel the world full-time and still pay our bills. If you want to know how we do it, grab your free guide where we share the 6 steps we took to turn our small blog into a thriving, 6-figure business.

All we need is your name and email address and we’ll deliver the guide directly to your inbox! You can also check out our social media pages on Facebook and Instagram for more hints and tips.