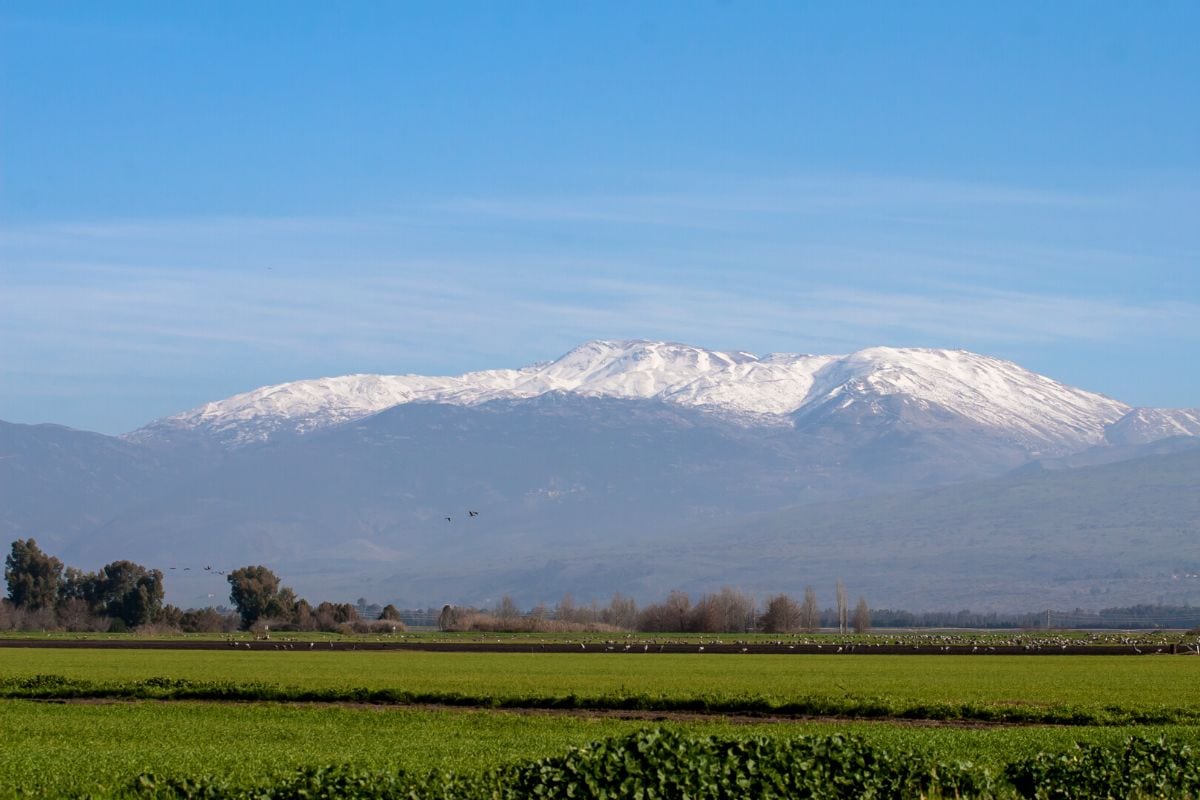 So does it snow in Israel? Or are we just fooling ourselves?! Here’s what our travel blogger friend Sarah from Mukikapup’s Travels has to say.

Israel is a country located in West Asia. It’s situated between the Red Sea to the north and the Mediterranean Sea to the east. The country is small – only the size of New Jersey – but in that area, there is an extreme variety of topography and climates.

❄️ The majority of Israel consists of the Negev desert, but don’t let that fool you – Israel does get snow.

Since most of the year in Israel, the weather seems to be on a scale of hot to hotter; it’s easy to get tired of sweating. The winter rainy season is cooler, with rain and wind in much of the country, but some areas experience snow.

The areas of Israel that get snow in the winter have higher elevations. This article will tell you where and when to find snow in Israel, where you can ski, and more about Israel’s climate and what to expect.

Does It Snow In Israel?

The short answer is yes; it does snow in Israel. However, it doesn’t snow everywhere in the country, just in certain areas with higher elevations.

The main places in Israel where you can find snow are Jerusalem, Safed (Tzfat), and the Golan Heights – specifically on Mount Hermon, which is also where you’ll find Israel’s one and only ski resort!

Israel can get snow from December through March, but most snowfall is in January and February because it’s the peak winter season. By March, you may see it melting already as Spring begins.

In addition, Mount Hermon is the only place in Israel that gets snow annually.

Tel Aviv and areas like the Dead Sea have seen snow before, but the last recorded event was in 1950. There is no recorded evidence of snow ever falling in Eilat, a popular resort town on the shores of the Red Sea.

The average temperature in Israel throughout the year ranges between the 80s-90s Fahrenheit, or 27-32 degrees Celsius. However, this temperature persists mostly in the summer and in parts of Spring and Fall. Winter is shorter and cooler in most parts of the country.

Read on for specifics on each season so you can know what to expect and how to prepare for a visit to the country!

Winter in Israel starts in October-November and lasts until March. It’s typically known as the rainy season because it doesn’t rain at all in the summer due to the desert climate.

Areas with higher elevation get snow, including Mt Hermon and the Golan Heights, Jerusalem (the capital city), and Safed (Tzfat) in Galilee.

Winter temperatures in Israel vary depending on the region. Areas on the coast, such as Tel Aviv and Haifa, are cold, cloudy, and rainy but still include sunny days without rain.

Winter in Israel is a great time to visit if you want to avoid the hot weather at all costs and don’t mind the rain, and also if you want to see snow in certain areas of the country. Plus, you can ski and do other winter sports at Israel’s one and only ski resort on Mount Hermon!

Spring in Israel lasts from late March through May. Temperatures in Israel during Spring are generally around the 60-70s Fahrenheit (15-20 degrees Celsius) in most of the country, but the lower elevation areas are hotter.

Jerusalem averages in the 40s-50s Fahrenheit (5-10 degrees Celsius) at night. There can still be some rain, but not as much.

Spring is the greenest time of the year in Israel, so it’s an amazing time to visit and see lush, colorful landscapes and flowers blooming.

Summer in Israel starts in June and lasts through September, though October can feel like an extended summer much of the time. Temperatures average in the upper 80s and 90s Fahrenheit (27-32 degrees Celsius).

Jerusalem is cooler and drier than most of the country and has cooler nights. Eilat, Masada, and the Dead Sea are at lower elevations and are hotter than the rest of the country, as hot as 115F, and extremely dry.

Summer is the most popular time of year to visit Israel for tourism, archaeological digs, and more because of the dry weather and sunny days with clear, blue skies.

Fall in Israel starts in September and lasts through November. Temperatures in Israel during Fall are generally around the 60-70s Fahrenheit (15-20 degrees Celsius) in the majority of the country, but the lower elevation areas are hotter.

Jerusalem averages in the 40s-50s Fahrenheit (5-10 degrees Celsius) at night. Rain can begin in late Autumn, and days start getting cooler and more overcast.

Fall is still a great time to visit Israel, especially as the weather begins to cool a bit – but be aware that hot temperatures tend to last through much of October!

Where To Find Snow In Israel

Wondering where to find snow in Israel, how much snow the country gets, and how likely it is to experience snow?

January is the coldest and snowiest month of the year in Israel, but only expect snow in the Golan Heights – Jerusalem and Safed get snow, but not every year.

Here are the places to count on for snow in Israel and how much snow they typically see each year.

The Golan Heights is located near Israel’s border with Syria, and Mt Hermon is the number one place to go if you want to see snow in Israel.

Mount Hermon, or Har Hermon in Hebrew, has Israel’s one and only ski resort. It’s the tallest mountain in Israel, with an elevation of 9,292 ft (2,814 m). It’s called “the snowy mountain” because it’s nearly always topped with snow.

The ski resort has 14 ski trails of around 28 miles each, for varying skill levels. There are also nine cable cars at the resort. The resort is open for various activities like hiking all year, but the ski trails are open from January through March.

You can ski and participate in other snow sports like snowboarding, snowshoeing, and sledding. You can also ride the cable car, experience the hovering Sky Rider, and visit the nature reserve.

❄️ Check the official website for hours and closures due to weather. They’re open seven days a week.

The historic capital city of Israel, Jerusalem, is located in the Judean Hills on a plateau right in the middle of the Dead Sea to the west and the Mediterranean Sea to the east. The city has an elevation of 2,500 feet (762 meters), making it high enough to regularly see snow.

Most years, snow in Jerusalem consists of light flurries mixed with rain. Every few years, though, there is heavier snowfall – up to 100 cm.

Jerusalem gets an average of 0.5 snow days throughout the year. If the temperature drops below freezing, the city can see heavier snowfall and even snowstorms, which gives Jerusalem several inches of snow.

Average snowfall in Winter in Jerusalem:

Safed is a city in Galilee that has the highest elevation and is the only one that gets snow with any regularity. It also gets quite cold compared to the other snowy areas.

When temperatures drop below freezing, and there is heavier snowfall, the city can experience snowfalls of up to 60 cm. Temperatures have been known to drop as low as 20 degrees Fahrenheit, or -7 degrees Celsius.

Average snowfall in Winter in Safed:

Even though Israel is mostly made up of the Negev desert, it has a surprising vastness in its diversity of landscapes and climate for such a small country. You can travel very short distances to experience completely new territories, which is part of what makes Israel such a unique and fun place to travel to!

If you want to experience snow in Israel, you can – you just need to know where to go and when. You can even ski at Mount Hermon.

Read on for answers to the most-asked questions about snow in Israel.

Does it snow in Jerusalem, Israel?

Yes, it does snow in Jerusalem. Jerusalem’s high elevation is to thank for its cooler temperatures year-round, cooler nights, and occasional snow. Jerusalem sees snow once every few years or so, and it varies in amounts.

When the weather drops below freezing, Israel’s capital city can get heavier snowfall and even snowstorms – but usually, snow flurries are seen with rain.

Does it snow in Tel Aviv, Israel?

Generally, it does not snow in Tel Aviv, but it’s not unheard of. Israel had record snowfall in January of 1950, and Tel Aviv was one of the cities that experienced snow. The storm actually started with hail in Tel Aviv and eventually got 12-19 cm of snow.

What is the coldest it gets in Israel?

Throughout the year, Israel generally stays between the 40s-90s Fahrenheit (5 degrees Celsius at the lowest in the winter). However, it can drop below freezing in the winter at times.

How much snowfall does Israel see each year?

The average snowfall for Israel is 500 mm. However, it’s more a matter of where the most snowfall can be found or where any can be found.

Mount Hermon in Golan Heights gets snow every year and also gets the most snow. Jerusalem and Safed (Tzfat) also get snow in the Winter, but usually only every few years.

The Wrap Up: Does It Snow In Israel?

When you think of Israel, you may not think of snow. Generally, Israel is associated with its dry, arid desert climate and brown desert tones, but that doesn’t even come close to identifying the vast array of landscapes, climates, flora, and fauna in this amazing country.

Israel does get snow in certain areas with higher elevations. If you’re in Israel in the Winter, you can easily make a day trip to a snowy spot (or make it your main destination)!